Since I am going to post pictures of January colors in Seattle I had better use the American spelling – I find that a bit hard.  Not the least of the cultural adjustment which awaits us in our move from Dublin to Seattle.

Sue in New Hampshire, U.S.A.,  Bettina in County Mayo in the West of Ireland, and Leigh in a southeastern corner of the U.S. have each posted their colors of January.  Here are a few of my photos to show some of the January colors in Seattle, in the far northwestern corner of the U.S., just south of the Canadian border. 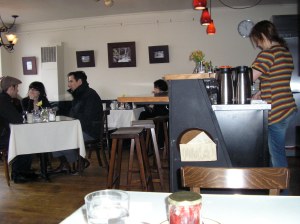 this was one of my first photos early in January when I had dinner in the local bistro, Caprice Kitchen – the other diners were dressed in warm black waterproof jackets

it was a bright sunny morning when I walked the 15 or so residential blocks to go to the Nordic Heritage Museum.   Along the way, next to one of the houses, was a large boat and appropriate boating related items stored beside it.  Being January, the sun is still low in the sky and the shadows are long – that’s my shadow in the foreground

sprigs of yellow flowers are much in evidence

and by contrast, here is a dark urban alleyway in the center of Ballard, note the rain puddle and the slant of the January sun.  Seattle is about the same latitude as Dublin so the angle of the sun and the length of the days are roughly similar.  However, since I came in early January the weather has been very mild, quite unlike the cold and snow and ice in Dublin and other parts of Ireland and Great Britain.  With the milder temperatures here there has been quite a bit of growth and one feels that Spring is not far away.

Occasionally I blog about longevity and yet again I am returning to this topic.  I recently read the book My Life in France by Julia Child, with and Alex Prud’homme.  I thought it was a wonderful book and it brought back so many memories of my sisters’ trip to Europe in 1950 and my trips in 1959 and 1962.  A few nights ago we viewed the film/dvd Julie and Julia which was based on the 2 books, one by Julie Powell and the other book mentioned above.  Both books were excellent and the film based on the 2 books and starring Meryl Streep and others was extremely well done.  James and Susan and I not only enjoyed the film, but maybe even more, the documentary afterward of the comments and testimonies of various family members and friends who knew Julia and Paul through the years.

Julia Child passed away just short of her 92nd birthday.  For me, I am ready to draw the line for longevity as anyone living into their 90’s and still being active.   From what I could gather from the film, Julia was certainly active well into her late 80’s and even into her 90’s.  What a wonderful woman. 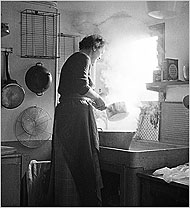 Julia Child in her kitchen on the Left Bank in Paris

Julia with her friend and co-author Simone Beck

It’s Amazing What You Can Discover On The Internet January 28, 2010

Filed under: Books,Knitting,Scandinavia — Janet @ 4:38 am

I have now discovered that there is a Seattle Knitters Guild and the next meeting is February 10th. 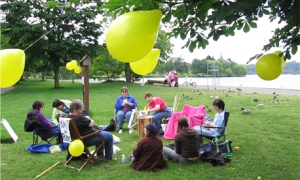 here they are Knitting in Public, 2008 – this photo is on their website

this is the other book I saw in the Nordic Heritage Museum Shop a year or so ago – they didn’t have it today but I’ll search to find where I can order it.

Filed under: Books,Knitting,Scandinavia,Seattle — Janet @ 4:07 am

I did a bit more unpacking today and discovered a lot of rug wool for weaving.  Now all I need is a loom.  As regular readers of this blog know, I sold my Glimakra and it has gone to a happy home in Limerick.  I am contemplating what loom to get – maybe just an upright rug loom since rugs are what I always seem to come back to.  In the shipment is quite a bit of material which has been the alternative for weaving on the Glimakra – that material was woven years ago and I still haven’t converted it into anything other than very attractive bolts of cloth.

Tomorrow I’m going to a meeting of the Seattle Weavers Guild.  I am really looking forward to that.  They meet once a month and happily I am here for the January meeting.  Maybe I’ll have a chance to discuss the possibility of a loom.

I had a wonderful day today at the Nordic Heritage Museum.  It is about a mile and a half from the house here and a very pleasant walk to get there.  I have been there several times before and loved it each time.  Today I concentrated on the shop as there were a couple of knitting books I wanted to look at again.  A year ago they seemed too expensive and too heavy to take back to Dublin.  Now I’m here for good (well, almost) and weight is not an issue apart from carrying them back to the house.  These books were published in Norway – I found one of them – Setesdal Sweaters, The History of the Norwegian Lice Pattern, authored by Annemor Sundbo.  Checking the internet I see that this book is available from Schoolhouse Press.  And a photo of the author can be viewed on gnomiejo’s blog, 2007, when Annemor was the guest speaker at the Seattle Knitters Guild.

The other book I wanted to find was out of stock or out of print, I’m not sure which.  In lieu of that, I found a book titled Norwegian Handknits, Heirloom Designs from the Vesterheim Museum, by Sue Flanders and Janine Kosel.

I bought a number of other things of Scandinavian interest and then wandered off to look at some of the exhibits.  There is a room devoted to each of the Nordic Countries – Denmark, Norway, Sweden, Finland, and Iceland.  There are also items showing how the Sami people live.  The textile items in each room are of particular interest to me, of course.  Photography is not allowed so I’ll just have to describe some of the items – will save that for another time.

Plans have changed for my return to Dublin so today instead of being high above the U.S., Canada, and the Atlantic Ocean, I am still on the ground in Seattle.  The repairs after the 2nd water damage in our house have not been completed and there is some controversy over who is going to pay.  Since it was the construction company’s fault it would seem logical that they would pay.  They don’t see it that way.  So that needs to be resolved somehow.     Over the weekend there were industrial fans in various rooms drying out the walls.

These fans make a lot of noise but seem to be very effective.

I managed to get a bit of unpacking done but only a little since I could only operate in one room. 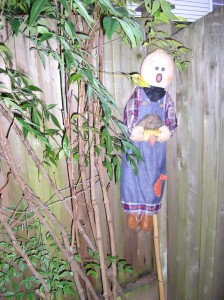 I’m getting to spend more time with the Seattle family – here is baby Ethan – he is holding a vegetable (carrot) shaker which I found for him in Dusty Strings.  I think the vegetable shakers are a lot of fun and it’s nice to have a good excuse to buy one.  They have a great selection in Dusty Strings – green pepper shakers, cucumbers, aubergines, cauliflowers, cabbages, tomatoes, apples. 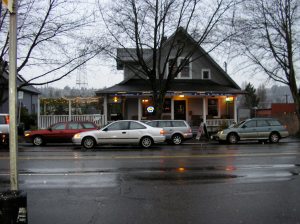 I hope to return soon to this shop, Mishu, where I bought a wonderful dress which might double as a Star Wars themed Halloween outfit next October

We thought we were all ready to go with the flooring in our new house.  The men arrived promptly at 8 a.m. and we discussed at length the direction and angles of the laminate which was to be put down.  Then we went upstairs to look at the floor which had been done earlier.  Ma’me – there is water up here – oh,oh.  There wasn’t water there yesterday so this was a new development.  Alas it turned out that the problems which everyone thought had been sorted out, in fact had not been sorted out.  So we now have water damage again and the floor could not be laid today.  That’s a set-back.  But I was able to get on with more unpacking and all will be resolved eventually.

Below is our dining area, very kindly furnished by a friend.  Ian’s pills and glasses sitting on the tray from Kenya – but that’s another story.  Note the empty boxes on the right.  The photo was taken late yesterday, before the water appeared this morning. 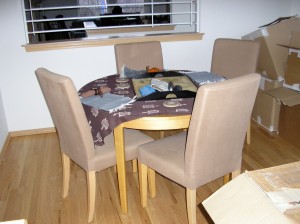 Ethan enjoying playing with some of our DVD’s – and you can admire him wearing his Elizabeth Zimmermann Baby Surprise Jacket  ( and the rug in the background is one I wove – it’s a Peter Collingwood corduroy rug – a mock rya – fun to weave and I really like it, I must say.)

Today wasn’t all bad news.  It was Market Day for the 2nd grade at school and budding textile artist granddaughter Ashley had made colorful crowns from felt to offer for sale at her stall.  The children earn special market dollars and then have these to spend on Market Day.  It was great fun, as you can see from the photos.

The children had their various wares spread out all around the classroom and they took turns shopping and selling.  There was a buddy system whereby your friend minded your stall while you went off to shop and vice versa.  James and I were visiting shoppers and we were soon joined by Susan and Ethan.  Caitlin is in Kindergarten so she missed out – how she would love to participate.  She is another entrepreneur in the making, showing promise at an early age.

Ashley’s crowns – I bought the green one with money kindly supplied in advance by Ashley’s teacher – I’d better do a good deed, or do well in my spelling test, etc. to earn that money

And for my knitting readers – here is another Blanket, now finished, to add to the Blanket Series.  Blanket Number 7 (?) 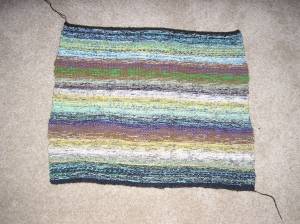 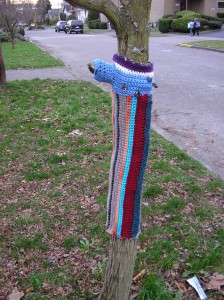 Just a few photos to show a beautiful sunrise yesterday morning.  The sky was all aglow shortly after 8 a.m. 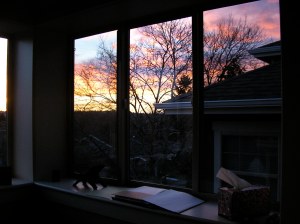 What a beautiful day we had.