I read in the Seattle Times that on February 10, 1840 Queen Victoria and Prince Albert were married.  Isn’t it nice to share a wedding anniversary date with such illustrious people – 42 years ago today on February 10 1968, Ian and I exchanged vows in St. Andrew’s Presbyterian Church, Nairobi, Kenya.  The Reverend Douglas Aiken presiding.  When he left Kenya, Reverend Aiken returned to Scotland and occasionally we would hear him on the BBC. 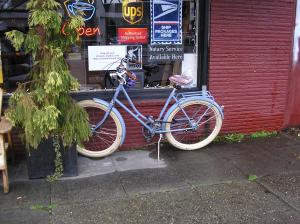 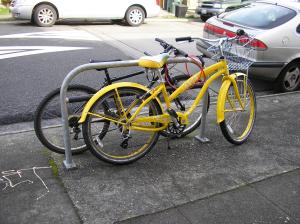 This yellow one looks like a good one – today I found out that the owner works at the Honore Bakery where I have been going for morning coffee.  She told me she got the bike on Ebay.  She used to have a boy friend who was knowledgeable about bicycles and he put it together for her.  I guess she likes the bike as when I expressed interest she didn’t say she wanted to sell it.

Susan has a bicycle that I can use until I find the right one for me.  I need to get in training for cycling with James and the girls on the tandem. 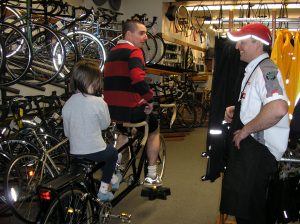 James and Ashley on the tandem.  The man who owns the bike shop is named Smiley. 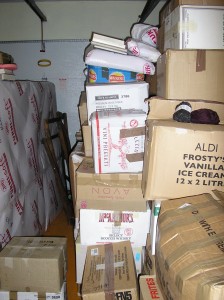