We must never forget. Amen

C-47 flying over The Hump

In April 1942, the Allied Forces initiated an airborne supply line  that crossed the Eastern Himalaya Mountain Range. This airlift supplied the Chinese War effort against Japan from India and Burma to the Kunming area and beyond.  The C-46 Curtiss Commando and the DC-3/ C-47 Douglas Skytrain in the China- Burma- India Theater of War (CBI), also dubbed as the Hump operations. Other Cargo aircraft types that were also activated in this operation: the Douglas C-54 Skymaster, the Consolidated B-24 Liberator converted as a fuel transport C-109 and its Cargo version C-87 Liberator Express. 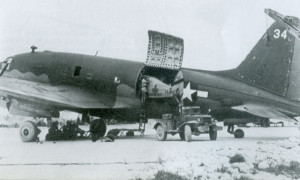 Loading in a grasshopper, (Piper L-4, observation or ambulance aircraft)

The Allied Forces supplied the war effort of Chinese Nationalists first by road, later by air. They flew day-and-night missions from airfields in eastern India over the Himalayan Plateau known as the “Hump.” The 500‑mile air route to…