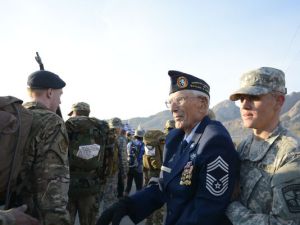 6,600 march in New Mexico to honor the Bataan fighters.

As we discuss and chronicle this war, we must not forget that the POWs of Bataan were at this point, still in captivity in various prisons of the Pacific and trying to survive.

Ralph Rodriguez says he’s not a hero. He doesn’t even want to talk about his wartime experiences of battling the Japanese and surviving the Bataan Death March.

“But I do it because I need to help people remember,” said Rodriquez, 98, following Saturday’s ceremony honoring Bataan Death March survivors who are still living, as well as those who have died since April 1942, when U.S. military commanders stationed on the Bataan peninsula in the Philippines surrendered to the Japanese.

“It’s not fun to really suffer or be tortured,” the Albuquerque man said.

Rodriquez was one of about 100 people, mostly military personnel, who attended the event near…