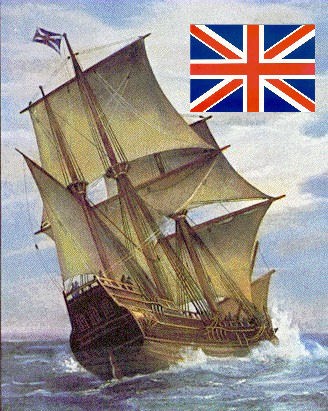 I said earlier that I was feeling overwhelmed by the number of ancestors I was finding who had sailed from England to North America in the early 17th century.  By arranging my list of ancestors in alphabetical order maybe that will help to keep track of them.  Hence the following:

*Alley, Hugh   I’m not sure why this name is part of this list

Atkins, Alice    1589-1650   arr 1638   she came with her husband John Stevens Sr and their sons William and John and 2 indentured servants John and Grace Lovejoy    the group sailed on the ship “Confidence”

Bailey, Reverend Thomas –  he and his wife Rebecca Friend came to Watertown from England in November 1687.  He joined his brother John   Rev Thomas died in January 1688/89, sadly before his son Thomas Bailey was born in August 1689

Bates, James  Jr – The Bates family came to America on the Winthrop Society ship “Elizabeth” in April 1635    family of Clement a tailor age 40 and Anne age 40 and 5 children and 2 servants

Botsford, Henry and wife Elizabeth Woolhead    Bedfordshire to Boston to Milford Connecticut   arrived in Boston June 26 1637 on the “Hector” and the “Martin”    many in the Prudden Davenport Eaton Company became the Original Planters in Milford Connecticut

Bracket, Capt Richard – came in 1630 with his older brother Peter.  Richard went back to England briefly in 1633 to marry Alice Blower

Clapp, Edward – came in the Hopewell at age 26

Cooper, John and wife Wilbroe came to America on the Hopewell in 1635

Crosby, Simon Sr – my 8th Great Grandfather.  He came from Yorkshire to Boston with his wife Ann Brigham whom he married in 1634.  They sailed on the Susan and Ellen.  His parents Thomas Crosby and Jane Sotheron came in 1638 to Cambridge.  Also Anthony Crosby, son of Simon’s brother William came to New England and resided in Rowley

Damon, Jane – at the age of 9 she came on the ship “Elizabeth and Ann”  to Watertown Massachusetts

Danforth, Nicholas – came in 1634 on the Griffin    with 6 motherless children   from Framlingham Suffolk  was an innkeeper   to Boston and Cambridge

Denne, Elizabeth – daughter of John.  She and her father John came from Boxted in Essex to Ipswich Mass.  They sailed on the Increase in 1635.

Denne, John – father of Elizabeth.  They came from Boxted in Essex to Ipswich Mass.  They sailed on the Increase in 1635

Dutch, Osman – arr Rhode Island 1630   settled in Gloucester   one of the original 11 Gloucester fishermen      sent for his wife Grace Pratt in 1639   she had to sell their property in Bridport Dorset England

Fletcher, Deacon John – first came to Watertown and then went to Milford Conn.  prior to 1635?

Fletcher, Robert – came from Lancashire to Concord arriving in 1630 with his wife Sarah Hartnell     Hartwell Farm??

Foote, Francis – came with her husband and children

French, Capt William – came at age 32 with his wife and 4 children.  They sailed on the Defence in 1635.  They settled initially in Boston and later moved to Billerica.

Hart, Deacon Stephen – wife Mary Symond   came to Massachusetts Bay in 1633   settled first in Cambridge then to Hartford in 1636 and finally to Farmington

Hartwell, Sarah – she came from Chelmsford England to Concord arriving in 1630 with her husband Robert Fletcher

Hosmer, James  with his wife Ann and 2 children and 2 maidservants   sailed from London to Massachusetts Bay in 1635 on the Elizabeth   settled first in Cambridge then in 1639 resold his land and moved to Concord

Ingersoll, Sarah  8th GGM  Bedfordshire to Salem  arrived 1629 in Plymouth as an infant with her mother Alice and father Richard Ingersoll

Lovell, Percival – at age 68 he came to Newbury on the “Jonathan” in 1639   big family group plus business associates

Melvin, Lady Janet – she was born in Scotland and she came to Virginia to live on the Isle of Wight

Miller, James Sr- he was born in 1610 in Norfolk England.  He married in 1637.  His wife was Lady Janet Melvin.  They were my 7X Great Grandparents.  Their son James Miller Jr was born in Charlestown in 1640

Miller, Sen – I think this should be Miller Sr

Moore, William, Sea Capt  – he was born in Berkshire and he emigrated to Ipswich Mass.

Morrill, Isaac and wife Sarah Clemmet came to Massachusetts Bay in 1632 on the Lyon and settled in Roxbury   9th Great Grandparents   one of their daughters, Mary, married a Folger and is mentioned in Moby Dick

Prescott, John  (and wife and 4 children)

Reese, Margaret – arr Salem 1636 with her husband and brother John

Scott, Ursula – mother of Mary Kimball   were these people from Suffolk and emigrated to Ipswich in the 1640’s?       Ursula was Richard Kimball’s wife      Mary Kimball was married to Robert Dutch

Smith, John Quartermaster – at age 30 he arrived in Boston or Virginia

Smith, Samuel – he and his wife Barbara Mumforde arrived in 1634

Starr, Comfort (Dr.) – emigrated in 1635 to Cambridge on the Hercules of Sandwich

Stevens, John  III   arrived on the Confidence in 1638  with his wife Alice Ann Atkins

Stone, Gregory – not a direct relative – Gregory and Simon sailed on the Increase.  The journey took 3 months.  Their grandfather Simon Stone was my     Great Grandfather.

Stone, Simon – not a direct relative

Toothaker, Margaret – arrived in Boston in 1635

Trimble, Alexander   1726-1785   County Donegal to Crown Point    left Ireland at the height of the Famine? the Famine was a century later

Vore, Mary – at age 13 in 1630 she was brought by her parents from Somerset to New England.  In 1646 she married Alexander Alford in Windsor Connecticut

Ward, Henry – Stratford Suffolk to Hingham     did he arrive in Virginia or New England in 1637?

Warner, Daniel – sailed on the Increase in 1635 with his parents.  Married Elizabeth Denne in 1640 in Ipswich Mass.

Warner, William -William and his wife Abigail Baker and 3 sons sailed on the Increase in 1636 to Ipswich Mass.

Wheatley, Rachel – 1584-1651     part of a large family network that came to the Braintree area and elsewhere in New England in the Great Migration     Rachel came in 1635 on the ship “Planter” with her 2nd husband Martin Sanders and 2 of her Brackett children by her 1st marriage

Willis, George – did he have a brother Michael?