Long before the days of the internet and Ancestry.com, my grandmother, Elizabeth Murdock Miller, compiled genealogical record books and charts/arcs for her paternal and maternal ancestors.  What a treasure trove of information she assembled.  I wonder how she did it.  Those were kept in the glass door bookcase in our living room in my childhood home.  Many is the hour I spent looking at these books.  And now here I am after months and years of compiling information from Ancestry.com and other internet resources and I am even now finding more information that matches what my grandmother found almost 100 years ago.

My latest find is the following from Geni.com:

“The Millers of Scotland were of Saxon origin and followed the leadership of Edward and founded Edinburgh, A.D. 449.  The history of the family is rather obscure until about the tear 1800 when the country was distracted by civil war, assuming a religious character between Protestantism and Catholicism.  The Millers sided with the Protestants, and later with the Presbyterians or Covenanters, when persecuted by James the First, in his efforts to establish Episcopacy.  The laws against Presbyterianism were so arbitrary that it lead to great disorder and opposition by the inhabitance, and many personal encounters passed between the liberty-loving Scots and the minions of the king, in the enforcement of obnoxious laws.  The name of James Miller is found twice recorded in a list of those who paid fines for transgressing the laws in the city of Edinburgh, …… [for account see VHM, p. 45].

The oppression of the Covenanters led many to seek the shores of America where they could worship God without restraint.  “Senior” Miller and his son, James, emigrated from Edinburgh about 1660.

(The above references a Miller family that emigrated to New England, not Virginia)”

Now after quoting the above, I wish to point out that my grandmother’s records show a Sen Miller arriving in Charlestown in 1660.  At last, here’s an ancestor identified by my grandmother and not found until today on an ancestry internet research site. Point One

Point Two – I am also under the impression that the Edinburgh Millers came to Edinburgh from the Isle of Sky.  I found that somewhere long ago when I was looking through my grandmother’s work but so far I haven’t been able to verify that bit if information. 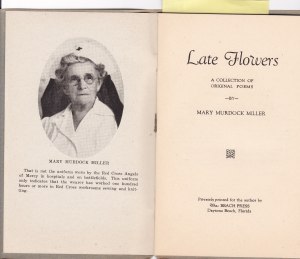 3 Responses to “My Grandmother Was Right”