Echoes of my childhood. During the War Years I was in elementary school. My beloved brother was in the Navy.

GPCox  shares the role sports played during World War II in entertaining those left at home. Sports was a diversion from the everyday reports of how the war was progressing in the various fronts around the world. 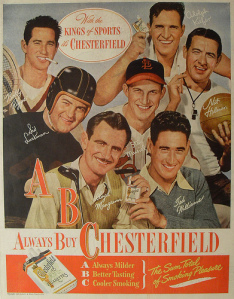 The movies and newsreels of WWII provided information and diversion for many at the home front, but none could provide the escape and release of stress for the civilian as much as sports.

South Florida maintained a carnival atmosphere with the Hialeah Race Track and West Flagler Kennel Club, which took in $100,000 nightly – just to prove my point.  And, somehow, travel restrictions did not deter the action at Miami’s Tropical Park.  Horse racing went on, despite the war, in every country.  All in all, racing boomed as the 68thrunning of the Kentucky Derby went off with 100,000 in the crowd.  Unfortunately, this was…

One Response to “Guest Post – The Role of Sports: WW II by GPCox”