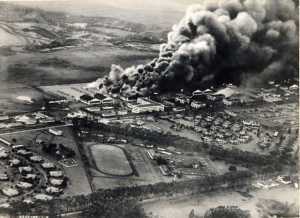 As I thought a bit more about the attack on Pearl Harbour, I searched for more information and photographs.  I came across this article from a newspaper in Mississippi. http://www.clarionledger.com/article/20091207/OPINION01/912070302/1008/OPINION   The gist of the article is that 68 years later the many wounds inflicted on that terrible day have healed and reconciliation has taken place.  Comparison is made with another direct, surprise attack on U.S. soil – that of 9/11.

Living in Ireland and other parts of the world for many years I have been out of touch with opinion in the U.S.  When the Twin Towers were bombed on 9/11/2001, I was horrified, of course, and I can remember exactly where I was and what I was doing – I was on my way to lawn bowling practice at Leinster Bowling Club.  The first sketchy report was just coming through on the radio.   I duly went on to practice and it was only later when I returned home that the live pictures were being shown on television and the full scale of the attacks was unfolding.  Workmen had been reroofing our house and they and my husband were glued to the television.  I like many others was concerned for friends living and working in New York and I tried to establish contact with them.  Bonnie who reads this blog was one of them.  Thankfully she was safe and sound and well away from Ground Zero.  She was on a train to New Jersey.

It wasn’t until 3 years later in the summer of 2004  that I met someone who had been closer to Ground Zero.  I went on a knitting and spinning week in Mull Scotland and talked with Nilda who recounted the more immediate terror of being very close to the event itself.  She revealed to me the depth of feeling that Americans had at that time.  And it is still fresh in people’s minds and memories.   In the newspaper article referred to above, the author hopes that we can learn from history and that eventually those wounds too will heal and we will be at peace with the Muslim world.  To quote from the article:

“The lesson of Pearl Harbor was that terror lingers. Muslim extremists knew that when they attacked the U.S. on 9-11.

But the U.S. eventually defeated the Japanese and later participated in the rebuilding of the country. Japan is now a key ally of the U.S. and mutual trust has been reestablished.

Obama’s Afghanistan strategy aims for an eventual reestablishment of trust with the Muslim world. As it was in the U.S. in the 1950s and 1960s with the Japanese, that will be a painfully slow process.

For as it did with Pearl Harbor all those years ago, terror lingers.”