I’ve went away for a week and now it has taken a week to get caught up to where I was before I went away.  I have been particularly slow in figuring out what I was doing in my genealogy research.  In fact in an unexpected lightening bulb moment last night I suddenly remembered that I was slowly and methodically adding to my annotated list of my ancestors who emigrated from the British Isles to North America.  And the core document for that exercise is a blog entry originally compiled in July 2016.

To add to my confusion I bought a new laptop and am having trouble getting set up.  That old eircom email address is snarling  things up.  Anything eircom is no longer validd or operational.

ancestry.com tells me that King Edward IV was my 13th Great Grandfather.  Could this be possible?  Will investigate further.

Filed under: Ancestor Count,Ancestors,Ancestry,Genealogy,War of the Roses — Janet @ 6:42 pm

I’ve completed my search through the ancestors I found on ancestry.com.  And I added a lot of ancestors I never knew I had – do I hear Henry Gates speaking?  Now to go back and sort/sieve the accumulated information.

The first snippet to share with my readers is that I thought I found that one of my ancestors had been beheaded on Tower Green at the Tower of London.  On further examination I found I was following a false trail.  The particular person that lost his head in that way did not belong to me.  A comforting thought.

p.s. Correction- my ancestor was the one who was beheaded.  In fact he was the first to be beheaded in the Tower of London by Richard of Gloucester.  He was 52 years old, father of 7 children.   He served on the Yorkist side in the Battle of Mortimer’s Cross in the War of the Roses.

this book is a mine of information re the settlement of my hometown area.  Combine this with all the information regarding my ancestors – who came when and from where – I’ve got a lot of mixing and matching to do.  Bonanza!

I’ve been working hard at finding more ancestors to add to my family tree and also to identify those who immigrated to North America.

And I have a list of over 100 possible immigrants I didn’t identify the first time around.

This work has been rather tedious but I have felt compulsive about it.

Now filling in the missing details will be more interesting.

Ancestry.com has introduced a new feature whereby they find all your ancestors.  All I have to do is click a few highlighted boxes and presto, each generation unfolds.  So instead of tediously jotting down names and dates and fathers and mothers etc., I can now hit keys on my keyboard in the right sequence and a new ancestor appears.  This is a beta version of a new program.  I’m not sure I like it or that it’s good for me.  It certainly saves paper and notebooks but it is so impersonal and mechanical.  By handwriting names and dates etc. I felt I was getting to know each ancestor a little bit, and I had to do a bit of thinking and digging to connect the dots.

My ancestor count has soared as a result of this new program.  I was close to 8000 ancestors on my tree – now in just a few days of using the new program the count has soared to close to 9000.  And I have to follow up on new names that have appeared in my sublist of immigrant ancestors.  And the additional coats of arms – well I’m overwhelmed.

On the plus side, this feature – beta search for a glowing green symbol and tap the key – should in theory give me more time to search for the information I’m really interested in.  The names and dates of birth and death are just the start.  I want to know where when and how they lived, etc.

Another Ancestor To Note 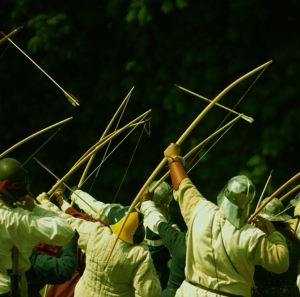 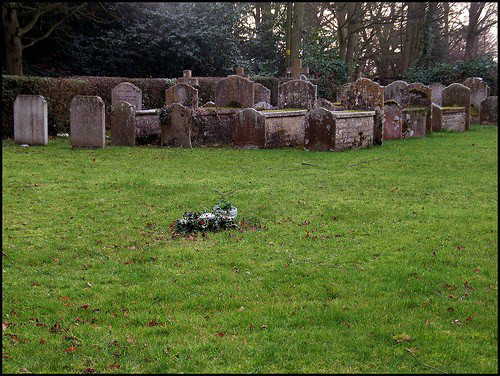 Practice Piece For a Series About My Immigrant Ancestors April 7, 2018

James was born in Cambridge Mass to his father James Hosmer Sr and 2nd wife Mary.  James Sr was actually the immigrant having arrived in Boston/Cambridge 2 years before in 1635, my 9th Great Grandfather.  James Sr has a colorful story but it was his son we write about below.

Concord Men Slain By Indians – Wayland, Middlesex County, Massachusetts, USA – Find A Grave Memorial# 52302008 [From Footnote: 2 Captain Hugh Mason’s company from Watertown went to the succor of Wadsworth’s command, and their account of finding the bodies of five Concord men on the east side of the river is as follows: — ” On the next day in the morning, so soon as it was light, we went to look for Concord men who were slain in the river meadow, and there we went in the cold water up to our knees, where we found 5, and brought them in canoes to the bridge-foot and buried them there.”]

James was the eldest child of James and Ellen (?) Hosmer. James was to inherit the Hosmer farm in Concord, and when he married Sara White another house was built for him and his new bride on the Hosmer farm lot. This was very near the Fitchburg Railroad bridge over the north branch of the Assabet River. This home remained in the family until 1870. James led a peaceful existence at the farm until Spring of 1676 when Indians began attacking families in his area in an attempt to wipe out the entire white settlement in this area of Concord and Sudbury. James answered the call to arms. “Arriving near the garrison house of Walter Haynes, they were decoyed into an ambush and several were killed. James stayed in the fight as long as possible, but when it was evident that the fight was lost he fled. It was while he was swimming across the river that he was shot and killed. At a stone post placed at the scene of the fight his name heads the list of those who lost their lives in this battle of King Philip’s War. 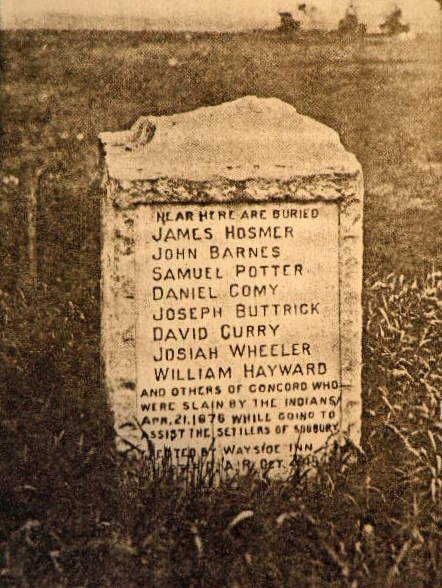