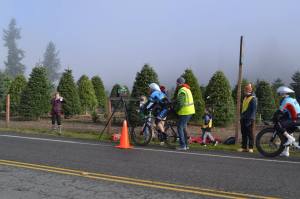 Yesterday marked the start of the cycling season – racing that is.  It was a chilly and foggy morning in the valley near Auburn south of Seattle.  Here is son James about to be launched – family members are gathered round.  It was a time trial wth cyclists starting every 30 seconds.  5 miles out, 5 miles return, taking approximately 28 minutes.  Various teams were represented.  James is with the Apex Team – they were well represented in the various categories.

James start time was about 9:20 and the fog had considerably dispersed by then.  That’s me to the left trying to get him at the start.   Grandson Sean is the supporter just to the right and James’ wife Susan is there in green.