Dorothy Height, one of the most prominent women in the U.S. civil rights movement, is famous for her many achievements and awards in a time of momentous change in American history.  On this American Mother’s Day, my thoughts of course turn to my mother.  Dorothy Height and my mother were both born in 1912, within a month of each other, and each named Dorothy.  My mother, Dorothy F. born in Minneapolis Minnesota, to white parents, comfortably placed, graduates of M.I.T. and Wellesley College.   Dorothy H, African-American, born in Richmond Virginia, her father a builder, her mother a nurse.  So I think of the distance that the 2 Dorothy’s travelled in their lifetimes.  By distance I am thinking of the changes that took place within their span of almost 90 and 100 years.  Dorothy Height was an African American, born at a time when racial prejudices in America ran very deep.  Dorothy H. became not only committed to racial equality but also to equality for women.  The 2 Dorothy’s lead very different lives but they shared many similar values, unbeknown to each other.

Dorothy Height reached the age of 98 – her obituary published in the Irish Times yesterday makes for fascinating reading.   Dorothy grew up near Pittsburgh Pennsylvania, not a tolerant environment for African-Americans.  According to the obituary, when her high school basketball team tried to enter a competition, the team was excluded because she was a member.  Later, she was not allowed to stay with other contestants at a statewide speech contest in Harrisburg, Pennsylvania.  She remembered that the only person in the hall with a black face was the janitor.  She must have been a precocious and determined student – she won an essay contest which brought the prize of a scholarship to Barnard College in New York.  When she arrived there in 1929, she was excluded because the college had already filled an unspoken quota of two African-American students.    This makes fascinating reading for people of my generation born in the 1930’s and growing up to participate in the surge of the Civil Rights Movement in the 1960’s.

But what lead me to write this blog entry was not only that this is American Mother’s Day but also I read in Dorothy H.’s obituary that “at one civil rights conference, she was reprimanded for knitting during the debates, but boldly defended knitting as a way of keeping more awake than some other delegates.”  I like it!!

Dorothy Height, well known also for her hats       from Wikipedia

The obituary concludes with a reference to a musical that was made about her life and called If This Hat Could Talk.  Here is a clip which I found.

“From gospel to jazz, blues, Negro Spirituals and ragtime, Verizon Presents If This Hat Could Talk takes you on a musical journey through time. Whether it’s Dr. Martin Luther’s King’s historic March on Washington, the bombing of the Sixteenth Street Baptist Church in Birmingham, AL or the events that ignited what ultimately became the Women’s Rights Movement, Verizon Presents If This Hat Could Talk, gives audiences a rare glimpse into the hallways of history.” 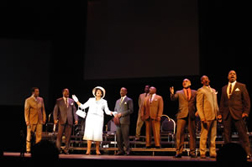