Well, the packers have come and gone and Slinki the cat is still here.  She very wisely went out while all was happening.  Those packers worked fast.  Too fast in fact – they packed a box of gardening tools that they weren’t supposed to.  Alas.  The packers came early and I hadn’t finished all my last minute sorting to be ready for them so it was a bit of a scramble.  Thankfully we found a few items in the freshly run dishwasher in time to include them in the packing but there wasn’t enough time for some wet clothes to dry and be included.  We’ll just have to squeeze some last minute things into the suitcases. 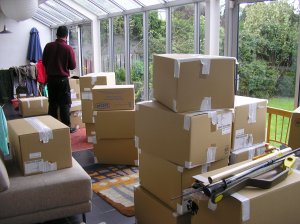 Now we can just sit back and relax until we depart as well.

A couple of days ago I was browsing in the crime section of Hughes & Hughes Bookstore.  I was looking for more Scandinavian crime fiction, given my current spate of reading Henning Mankell, Sjowall & Wahloo, and Jarkko Sipila.

first, the author’s name caught my eye – Sebastian Junger, the author of The Perfect Storm

secondly, the title, A Death in Belmont – my hometown!

This was compulsive reading – and true.  Wow!  I was fascinated.  The book is away now in one of the cardboard boxes.  I tell you, reading it certainly delayed me in getting ready for the packers.

this black blob is the cat, resting peacefully after the flurry of the packing – I must say that I was relieved to see her walk past the window after all the boxes had been sealed.  There was a snippet on the radio this morning about a woman dropping a cat into a dustbin and walking away.  15 hours later the cat was rescued, apparently no worse for the time spent.  Probably had a nice sleep in there.  But, I’m curious – if this woman was seen fondly saying goodbye to the cat and then dropping said animal into the bin, why didn’t the observer rescue the cat then and there.  Maybe the observer was a security camera of some sort and then when the cat was found, the film was reviewed.  Or did I just dream all this instead of getting up earlier this morning in anticipation of the packers arrival at 9.