Remember Thor wearing the Icelandic sweater?  Met while shopping in Fred Meyer.  Well, we met again today.  No picture today (darn) so here he is as seen a few weeks ago. 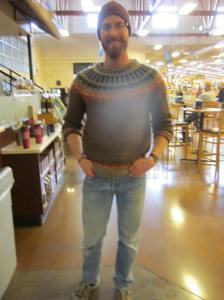 Today he was still identified  by the fact that he was wearing the Icelandic sweater.  But his speech/voice sounded very American    not Icelandic.  Also, his mate called him by some name other than Thor.  I think there were other things slightly different – maybe the beard or a cap which showed a haircut.  I don’t know, but I was slightly suspicious of his story.  It doesn’t matter – he was friendly and fun.  He says now he is busy getting the boat ready to go fishing up in Alaska, and he’ll go back to Iceland in October.  We were sure we would see each other again – I’ll recognize him if he keeps wearing that gorgeous sweater! 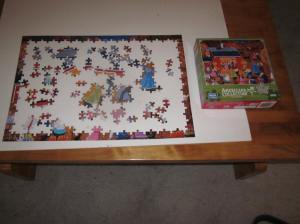 I’ve decided to just pack up this puzzle without finishing it.  I just haven’t found the time to work on it – partly because any spare time is spent knitting,  And the table where we have the puzzle is too low.  I was developing a sore back and the physiotherapist thought it was due to working on jigsaws at this table.

On a different note, there was a footer on CNN to say that one of the Cartalk brothers had passed away today, age 77. from complications of Alzheimers.  Cartalk started in 1977 and was taken over in 1987 by NPR.  The brothers stopped doing live broadcasts in 2012,  We used to listen to Cartalk every Saturday morning and had many a laugh over this crazy programme.