Filed under: Books,Librarians,Libraries — Janet @ 4:15 am

Readers of my blog might remember that once upon a time I had a “book business” which I called Janet’s Books.  Janet’s Books appeared regularly at the Dublin City Book Fair.  Then Janet’s Books relocated to Seattle.  And now in recent months some of the stock has been distributed round to other 2nd hand booksellers in Seattle, either for cash or credit.  Many books still remain – but the Seattle Public Library fund raising sale is coming up again in September and donations are welcome.  So bags of books – the last of my Dublin inventory – are going out the door and handed over gratis to the local library.   I wonder how many we’ll see again when we go to the big library sale in September.  I’ll try hard not to buyback any of my previously owned books.

I had a nice reminder today of my local library of years ago in Belmont Mass.    One of my high school friends found a picture of that local Benton Branch Library – it was at the corner of my street – the corner of Oakley Road and Old Middlesex Road.  I used to go to that library almost every day.  It was my local “hanging out” spot – and particularly after my mother started working there.  It was a cosy little place.  It used to be the chapel for the Benton family who had a big house and surrounding land. 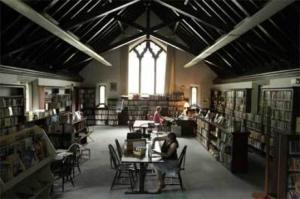 Mayhem at the library……that’s an exaggeration but it was very busy yesterday (Sunday) at the Seattle Public Library in Ballard, and no doubt elsewhere in Seattle.  Because of budget cuts, the libraries are closing for a week.  This is the second year that this has happened and worse is forecast for 2011.  The major saving is in salaries paid, which really means salaries not paid to the staff.  At least they keep their jobs and have a week off, but I would suspect that the no-pay aspect is not so welcome.  Anyhow, we rushed down to the library yesterday for a last minute return and collection and the library was very busy with other patrons doing likewise.

We arrived in Seattle in good order on Saturday evening.  Our trans-Atlantic, trans-continental trip was fine.  A 7 hour flight from Dublin to Chicago, a brief pause to catch our breath and pass through the all-important hurdle of immigration.  We were almost through immigration when a number of other people arrived, Caucasian American with babies who appeared to be African – they took priority so we had to sit for a little while as the man processed their forms. It didn’t take long but we wondered why we were being by-passed when we had arrived first.  I later found out that these people had all come on the same Lufthansa flight from Ethiopia and the babies had been in an orphanage in Awassa in southern part of that country.  Orphans get priority over senior citizens.  We didn’t really mind – we were just puzzled.   There was much happiness as each family received the final stamps on the babies’ documentation. Particularly for the family whose baby had been quite sick on the flight.   We were equally happy when Ian received the final stamp on his passport.  Welcome to America.  This process made me think of other families in the past arriving at Ellis Island in New York after being at sea for many weeks.  What a change.

Having written about St. Nahi’s Church here in Dundrum and referred to the Dundrum Library just behind it, I’ll add some information today about the library.  I discovered a book with lovely paintings and informative text about some of the features in our Dundrum/Stillorgan/Rathfarnham area.  The paintings are by Olivia Hayes and the text by the late Christoper Ryan.  On the cover is a painting of our Main Street here in Dundrum – the terrace of red brick houses is very distinctive.

The library in Dundrum is one of the many Carnegie libraries scattered around Ireland, and to be found in other countries as well.

According to the Christopher Ryan’s text, Andrew Carnegie was born in Scotland in 1835.  He emigrated to the U.S. where his first job was as a bobbin winder in a cotton factory.  By the time he was age 50 he had his own steel works and was becoming increasingly wealthy.  During the last 18 years of his life, Carnegie sponsored the building 2,811 libraries – 660 of these were in the British Isles.  There are several in the greater Dublin area.  The Dundrum Library was opened in August 1914 by the then Lord Chancellor.

In the early years the library was also used as an entertainment centre.  The upper floor had a stage and a kitchen and was a popular venue for concerts , plays, dances, and sales-of-work.

When we came to Dundrum in the late 1960’s the library was closed and if I remember correctly it did not open until the late ’70’s.  It is now an excellent community resource, no longer for plays and entertainment, but it houses an excellent collection of books and reference material.  And it also has computers for community use.  It also hosts activity groups for different interests in the community – e.g. a reading group, a Scrabble Club, Cupla Focla – an Irish conversation group.  And I think I also read about a knitting group meeting there.

As to my knitting – here’s a photo labelled Still Life – Knitting, Watering Can, and Cat

the knitting is my current work-in-progress, another blanket

The bird life in the garden these days is wonderful.  I have watched a number of birds gathering material for nest building in nearby shrubs or trees.

This isn’t the best of photos but this is a very friendly robin who hovered around us as we had coffee this morning in the garden of friends.  I wouldn’t have known it was a robin except that our hostess told us so – it was newly fledged so it did not have the characteristic red breast.  It reminded me of what I would imagine a baby thrush to look like with a brownish speckled breast.