This marker is for my 9th Great Grandfather.  This is intriguing because I vaguely remember visiting relations named Botsford in the Boston area.  I will pursue this further.

Some familiar names in my genealogy

The land which today comprises Milford, Orange and West Haven was purchased on February 1, 1639 from Ansantawae, chief of the local Paugussets (an Algonquiantribe) by English settlers affiliated with the contemporary New Haven Colony. Originally, the area was known as “Wepawaug”, after the small river which runs through the town, and which has given its name to several streets in both Milford and Orange. 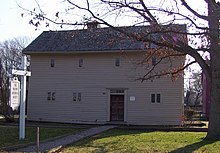 The Eells-Stow House, circa 1700, is believed to be the oldest extant house in Milford

A grist mill was first built over the Wepawaug River in 1640.[2]

During the Revolutionary War the Milford section of the Boston Post Road, a vital route connecting Boston, New York and other major coastal cities, was blockaded by Continental forces, and Fort Trumbull was constructed to protect the town. The site of the blockade is commemorated by the Liberty Rock monument. 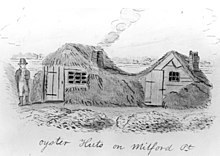 Oyster Huts on Milford Point, a sketch by John Warner Barber for hisHistorical Collections of Connecticut(1836). Barber wrote that he found 15 or 20 of these seaweed-covered huts along the shore when he visited the town in 1836. Oystermen used the huts in the winter.

By 1822, the town had grown large enough that residents in the northern and eastern sections of Milford chartered their own independent course as the town of Orange. During the next century and a half, the remaining section of Milford was known for shipbuilding, farming and oystering, although a small subset of industrial facilities also developed in town. During this time, Milford also became known as a beach resort for residents of New Haven and Bridgeport.

Interestingly, the boundaries of the final town charter granted by the State of Connecticut in 1899 to Laurel Beach are contained entirely within Milford. Residents of Laurel Beach must therefore pay taxes to both Laurel Beach as well as Milford, and all mail to Laurel Beach residents is mailed to Milford. 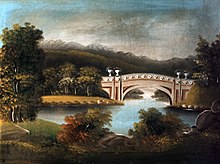 Also in 1899, the “Memorial Bridge” (a “stone bridge and tower commemorating the town’s history and founders”)[3] was built at the site of the last mill over the Wepawaug after it was closed in 1894.[2] “The stone bridge is simple in design, its broad copings surmounted with rough hewn blocks of granite, bearing the names of the first settlers. There are ten blocks on the south and twenty on the north coping. At each end of the former is a stone four feet wide by five and a half high.”[2] It is located where Broad Street crosses the Wepawaug River.