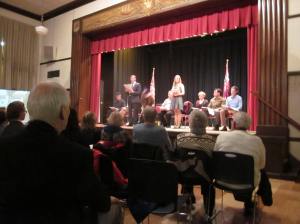 The Epiphany.  A play reading at the Nordic Heritage Museum, January 22, 2015

This was a splendid reading of an excellent play.  It was written by Dr. Bruce Olav Solheim.  The play is set against the backdrop of Nazi occupation in World War II. 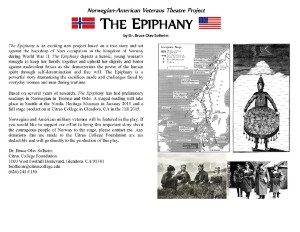 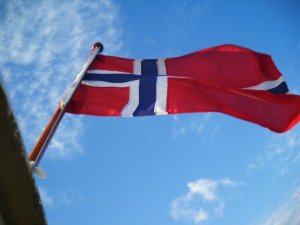 Just a little bit about knitting today.  More about the Book Group meeting this month.  This was our annual dinner meeting and we not only had a delicious pot-luck dinner but also a featured speaker.  This year’s speaker was Gerard Dawe – a figure of note in the Irish literary world.   Gerard calls himself a poet, but at the meeting he talked about his recent book, My Mother’s City.  This was fascinating.  His book is mainly about the Belfast of the 1950’s-70’s.  The world he grew up in.   I arrived in Belfast in August 1968.  To a newcomer, it was a peaceful scene.  Little did I know of the Troubles with a capital T that lay ahead.  We were in Belfast for only a short time before moving to Dublin.   Dublin is only a little over 100 miles south of Belfast.  But there is a world of difference.  It is hard to articulate the differences and I as a newcomer felt very much the role of observer and of trying to understand the subtleties and complexities of what to me were 2 new countries, North and South.  I have now lived in Dublin for almost 40 years – I’m still observing, learning, and puzzled over the differences, not only between the North and the South of Ireland, but also the differences between my New England background and my adopted island of Ireland.

Now as to the knitting.

this is the beginning of Hodge Podge no. 5, aka mindless knitting of squares now being assembled.

and here are 3 previous hodge podges having an airing in bright sunshine earlier today.