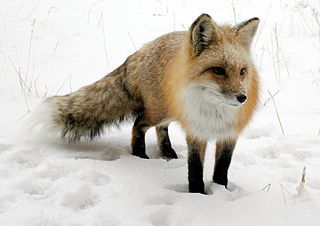 Image for a poem by Ted Hughes

Have you heard of this book?  this author?  Well I hadn’t heard of the author Jerome Chardyn or the book A Loaded Gun.  I had heard of Emily Dickinson, a New England poet of the 19th century.  Now I seem to be finding the author and his work and Emily Dickinson references everywhere.  I originally ordered the book partly because I was intrigued by the title and I was interested in learning more about  this poet.  I have been rewarded.  It has turned out to be a fascinating read.  Now I will turn to a fictional book about Emily Dickinson by the same author.

A poem by Thomas Hardy

I leant upon a coppice gate
When Frost was spectre-grey,
And Winter’s dregs made desolate
The weakening eye of day.
The tangled bine-stems scored the sky
Like strings of broken lyres,
And all mankind that haunted nigh
Had sought their household fires.
The land’s sharp features seemed to be
The Century’s corpse outleant,
His crypt the cloudy canopy,
The wind his death-lament.
The ancient pulse of germ and birth
Was shrunken hard and dry,
And every spirit upon earth
Seemed fervourless as I.
At once a voice arose among
The bleak twigs overhead
In a full-hearted evensong
Of joy illimited;
An aged thrush, frail, gaunt, and small,
In blast-beruffled plume,
Had chosen thus to fling his soul
Upon the growing gloom.
So little cause for carolings
Of such ecstatic sound
Was written on terrestrial things
Afar or nigh around,
That I could think there trembled through
His happy good-night air
Some blessed Hope, whereof he knew
And I was unaware.
Leave a Comment 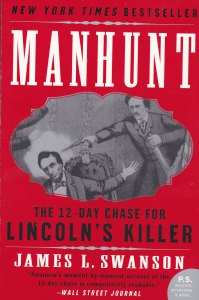 I have been writing about my grandmother’s little book of poetry, Late Flowers, written when she was in her 70’s.  The poem I want to quote today is her tribute to Abraham Lincoln.  Having lived overseas for so long I had kind of forgotten my U.S. history or maybe my history lessons slipped to the back of the queue in my brain.  Whatever, now being back in the U.S. on a more permanent basis I am refreshing and renewing my interest in matters historical on this side of the Atlantic.  I recently read the book Manhunt, the 12-Day Chase for Lincoln’s Killers, by James L. Swanson.  One thing that struck me about the book was the fervor with which people reacted to the Assassination.  Abraham Lincoln is an icononic figure in U.S. history but in part it was the fact that he was assassinated that elevated him to such a…

This book has been in print for a while – and also sitting on my shelf of unreads.  But I have finally got around to reading it and it was most enthralling.  On Amazon.com I found the following review from the Scotsman.

Theo Dorgan’s gripping account of a transatlantic voyage on the schooner Spirit of Oysterhaven-from the Caribbean to the coast of his native Cork-is both travelogue and meditation, interior journey and outward voyage of exploration. Dorgan’s meticulously exact account of the labour and skills involved could well act as a handbook for anyone prompted to repeat the adventure. His feel for the history of the sea and sailing, drawn from wide reading, is tested against the practical realities of what is involved in such an ambitious undertaking. The qualities of endurance and willingness he must find in himself, the shared experiences that make four individuals into a crew, all these come as a succession of revelations. He brings a poet’s eye to the immensities of the ocean, its lore, its mysteries and its secrets. As so many before him, he will learn that what you find on the journey, not the destination, is what matters. “A book for everyone”-Doris Lessing “This book exerts a form of curious hypnosis which stealthily insinuates its rhythms into your mind. It keeps you alert while somehow lulling you into a drift of easy reading. This enticing travelogue’s curious spell is slow and incremental, yet all the more potent for being stealthy.” -THE SCOTSMAN
So I recommend the book to anyone with an interest in distance sailing, or Ireland, or self-awareness/examination.
Comments (1)

I have the impression that it was very fashionable several generations ago for genteel ladies to write poetry.  I would like to think that my grandmothers would be numbered among such circles.  My maternal grandmother was very well educated, having attended Wellesley College in the early years of the 20th century.  My paternal grandmother also attended college, albeit less prestigious.  In fact it was called a  Normal School or a 2 year teacher training college – this school dated back to the 1840’s and is now a large university, SUNY.   I would like to learn more about their early lives.  One was born in 1863, the other in 1872.  One grew up in Boston, the other in upstate New York.  Each married and raised families.  One lived almost to age 70, the other lived into her 90’s.

It was my paternal grandmother who actually compiled a little book of her poems and had it printed.  I am so pleased, and thrilled actually, to have this legacy from her.  I cannot assess her work as to its literary value, but to me it has great personal value.  It is only through this little booklet, a few photographs, and a few of her letters and recollections of my sisters that I have a feeling for what this person was like.  I wish I could have known her in real time.

I have even fewer ways of getting a sense of the type of person my maternal grandmother was.  She passed away when I was very young, hardly a toddler.  There are only photographs – not even letters.  Now as the years pass, I think about my mother in so many ways – as she grew older did she think about her mother in the way that I do?  It is puzzling to me.  And questions I could have asked but never did because at the time those answers weren’t of interest to me.  Does each generation live in its own present and just idly wonder about the comparable present of previous generations?  Now that I am a grandmother myself, I want to know more about the grandmothers who went before.

May Belle in earlier years with 2 of her children

As I explore the lives of previous generations in my family, I’ll shift the theme a bit from what were they reading then to what were they singing then.   As regular followers of my blog know, one of my grandmothers became a poet in her later years.  And the other grandmother, on my mother’s side, was an accomplished musician.  Her publications are listed in her entry in The Woman’s Who’s Who of America, A Biographical Dictionary of Contemporary Women of the United States and Canada, 1914-1915; John William Leonard, Editor-in-Chief.  Published by the American Commonwealth Company, New York.

She is listed as the author of the following:  Ten Easy and Melodious Recreations;  Twelve Melodious Etudes in Unfamiliar Keys;  Six Duets;  On the Playground;  Love’s Solace;  Ride of Revere;  L’ll Drum;  Love Lost;  Lullaby;  Eventide;  Romance in G.  This list indicates to me that she was a piano teacher.  I wonder.  I know she taught Sunday School after the family moved to Winchester Mass. in the mid-1920’s.  My cousin who lives near the family home in Winchester has met a person who was a Sunday School pupil of this grandmother.

What I’m leading up to here is to write about another venture of mine that is on the burner, so to speak.   Inspired by my daughter-in-law and my 2 grandaughters here in Seattle, I have been taking voice/singing lessons.  The teacher Krista of Krista’s Music Studio is most encouraging, as is my cousin in San Francisco who did voice lessons herself a few years ago.  I am really enjoying the experience.  Last weekend there was a recital featuring Krista’s students of flute, piano and voice  – my classmates, I would like to say although we don’t all gather round the piano at the same time.   The recital, held in Bethany Lutheran Church, was wonderful, and  daughter-in-law Susan and the grandaughters Ashley and Susan participated.  Caitlin performed early on and she played a Mozart piece, A Little Night Music.         Ashley was further along in the programme and her piece was Ode to Joy.    And eventually it was Susan’s turn.  She sang Mozart’s Ave Verum – it was beautifully moving.  The memories came flooding back of singing this piece when I was in Bhutan and participated in a small choir.  It was our piece de resistance for our performance in the Hotel Jumolhari there in Thimphu.

Krista has 9 adult students and for us neophytes there is going to be a soiree.  I am of 2 minds about performing in this more intimate setting but am probably going to do it.  But my debut will be in a duet with Susan, who is more keen on solo performances than I am.  Hopefully she can cover my mistakes or hesitations etc.  It’s supposed to be fun.  The song we are going to work on is Aura Lee, a Civil War song.  Since my grandfather served in the Civil War, I feel it’s legitimate to include this in my research of the generations and hence the title What Were They Singing Then.  Here are the lyrics I’m trying to memorize.  We have until March 5th to perfect our duet.

Aura Lee, from the Guitar Song Book
Words by W. W. Fosdick
Music by George R. Poulton
Verse 1 As the blackbird in the Spring

Sat and piped, I heard him sing

In praise of Aura Lee

And swallows in the air

Verse 2 Take my heart and take my ring,

I give my all to thee.

Verse 3 In her blush the rose was born,

‘Twas music when she spake

In her eyes, the light of morn

Then the wintry winds may be

Chorus 4 Yet if thy blue eyes I see,

For to me, sweet Aura Lee

Is sunshine to the heart

But before we get to perform the above, here is the programme for last week’s concert and a few photos. 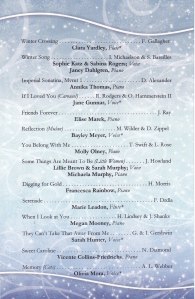 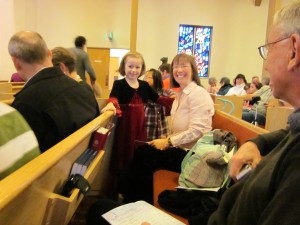 before the concert, Caitlin and Susan 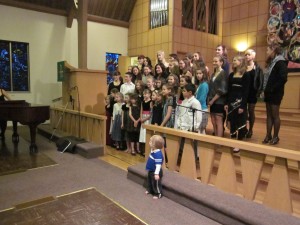 after the concert, note baby Ethan as well.  All the performers did so well.  It was a wonderful concert. 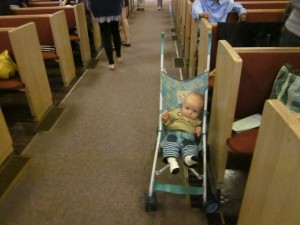 baby Sean was eager for it to begin – I got to hold him while Susan sang – thankfully he didn’t start crying!  I was the one who was shedding a few tears of emotion.

I don’t seem to have an individual photo of Ashley but she is in the front row of the group photo.