Filed under: Belgian Congo,Books,Conservation,Democratic Republic of the Congo,Kenya,Uganda — Janet @ 12:45 am 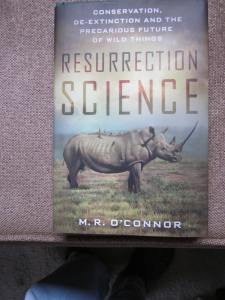 I certainly recommend this book – Resurrection Science, Conservation, De-Extinction and the Future of Wild Things, by M. R. O’Connor.  The author gives 8 case studies in which she raises various scientific, economic, ethical, and philosophical points.  And it’s quite comprehensible for a non-scientific person.

Yes, I made it to Seattle – I had a window of opportunity to depart Dublin and had an easy trip.  Dublin, Chicago, Seattle – 20 or so hours – and it was still the same day.  No objections were made to the fact that I had my knitting so that helped to pass the time.  And I read a wonderful book – Snow on the Equator, An African Memoir by Sean Rothery. The author lives near me in Dublin although I don’t think I have met him or his wife.   He is now in his 80’s and has written this memoir about his 3 years in Uganda back in the 1950’s.  Sean was an architect and he and his wife Nuala were keen mountain climbers.  In a spirit of adventure they made the decision to leave Ireland to go out to East Africa.  Sean was employed by an architectural firm in Kampala Uganda and Nuala found work with the Government Dept. of Education.

Every page of this book brought back memories for me.  I too went out to Africa in a spirit of adventure 10 years after Sean and Nuala.  I left California to go to Nairobi to take up a post with the Institute for Development Studies at the University of Nairobi.  And almost simultaneously, my husband to be left Belfast Northern Ireland to go out to Kenya to take up a position with the Town Planning Department of the Kenya Government.  We met – and the rest is history.

Ian and I did not climb any of the mountains in East Africa but we travelled a great deal and so many of our trips (safaris) and daily experiences were similar to those of Nuala and Sean 10 years previously.  We left Kenya in 1968 and then returned to live in Nairobi again in 1989.  Just fascinating to see the changes.  I want to write so much more about this  – Sean’s book is an inspiration to me to put pen to more of these reflections.  So, watch this space.

In the meantime, here I am in Seattle at the home of our eldest son, whose life began in Kenya 40+ years ago.