One of my favorite programs on PBS is American Experience.  Last night it was about the building of the Boston Subway.  Fascinating.  This was my mode of transport in and out of Boston.  I travelled from Belmont to Harvard Square via street car and then descended to the subway.  The street cars have long since been replaced by buses.

Watching the program resulted in a discussion with my husband comparing his travel by trolley bus into the center of Belfast Northern Ireland.  Were we talking about the same thing?  Possibly but his trolley car had 2 levels v my street cars were single story.

In fact his system was unique.  It was the only trolley bus system ever to be built in Ireland.  It opened in 1938 and it gradually replaced the Belfast tramway network.

The Belfast system was the 2nd largest of all the now defunct trolleybus systems in the U.K.  It closed in 1968.

For once I think my husband and i were talking about the same thing.  Oh the memories of our youth. 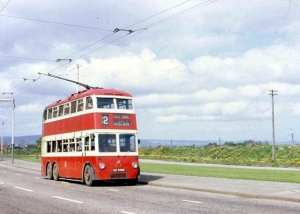 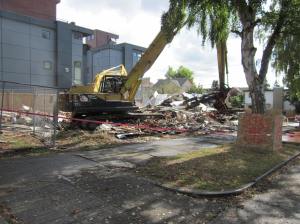 here is what I saw this morning on my way from a trip to the bank and the drug store in downtown Ballard.  I was in a quiet residential neighbourhood within a stone’s throw of 2 substantial church buildings.  I had passed this site just an hour before – the second story of what was once a fine old house was still somewhat intact.  An hour later it was completely torn down.  What will take its place?  Guess – an apartment block.  This is an example of what is happening in Ballard – more and more holes in the ground – more and more apartment blocks.  Sad.  I’ve been told though that there is an ordinance to prevent it happening close to us – we wait and see. 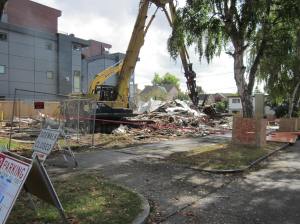 For more on the situation in Ballard see the Seattle Weekly, Sept. 9    (thank you to Jay Moor for sending me this article)