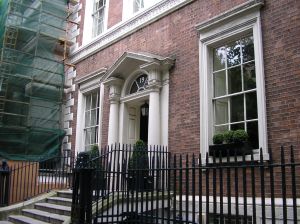 In the Irish Times Weekend Review section this past weekend (Saturday August 15) there was a review of the latest publication, the Idea of Justice,  by the Nobel Prize-winning welfare economist Amartya Sen.

Professor Sen was in Dublin earlier this year to deliver a lecture at Trinity and to be made an honorary member of the Royal Irish Academy.  I had the pleasure of meeting Professor Sen on this occasion.  In another life, when he and I were much younger, he was my professor at the University of California Berkeley.  It was relatively early in his career; he was a visiting professor at Berkeley and I was a “mature” graduate student.  Mature at that time meaning about age 28.  He was already a distinguished lecturer and he gave a very compelling course in development/welfare economics.  From Berkeley I went on to Kenya to work on my dissertation.  Professor Sen moved on to continue a notable career at Harvard, Cambridge in England, and other universities.   In 1998  I was thrilled to read in the Irish Times that he had been awarded the Nobel Prize for his work in welfare economics.   And I was even more thrilled to actually meet him again when he came to Dublin.  We had a brief chat at the Royal Irish Academy where he was awarded Honorary Membership – a chat encompassing memories of Berkeley, Professor Sen’s ties with his native home in Bangladesh, and colleagues we know in common  in the field of welfare and development economics.  For me, this encounter has been one of the highlights of the summer.