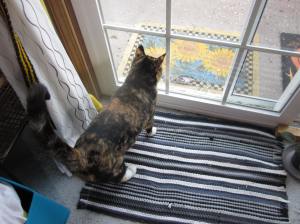 This morning the cat appeared at the window/door with a bird in its mouth.  I opened the door with the intention of chasing the cat away and making it release the poor bird.  Instead the cat dashed past me into the house and the bird got away to fly around the kitchen.  But when the bird landed, the cat caught it again.  Amidst much noise (by me) the bird was released, I scooped it into an empty salad container (courtesy of Ballard Market), slapped the lid on,  and went out to the porch and released the bird.  It flew away, rejoicing I’m sure.  Meanwhile I had a very distressed cat.  She just couldn’t figure out what had happened.  But she knew one thing – she had lost her bird!   She was very cross with me and went downstairs to sulk in her room for the rest of the morning.  It is now about 12:30 and all this happened nigh onto 3 hours ago.